Stakeholders have power. Whether it is the formal power from a position of authority or social power from an ability to persuade others, a stakeholder can support or oppose change. In a consulting engagement, those with higher power are likely to be your most useful supporters or most dangerous opponents. Thus, stakeholder analysis helps you prioritise your focus on stakeholder segments. Mapping stakeholders can be extremely useful to understand the support and opposition you could expect for your recommendations 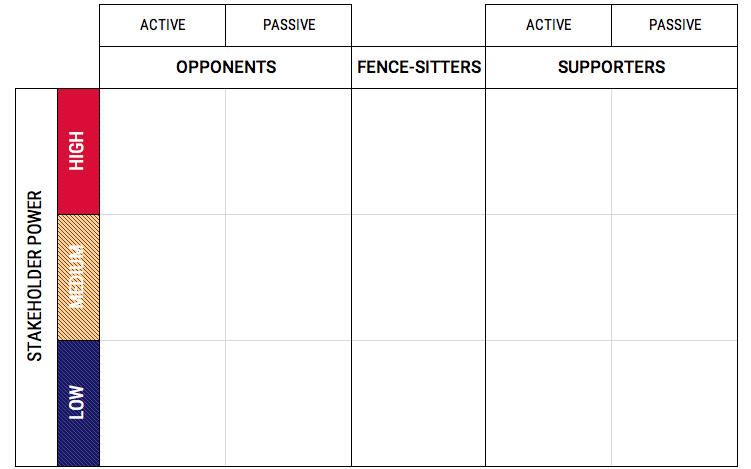 Active and passive support and resistance

Some stakeholders will actively support the engagement, putting their necks on the line to help it succeed. Others will apply themselves to sabotage your efforts. As a consultant, you should direct your focus on these active groups. However, there is often a silent majority that is difficult to judge and classify. These may be in gatekeeper positions. Instead of taking an active and obvious stance, they can subtly support or oppose the cause. Depending on their posture, they may catalyse or hinder progress.

Fence-sitters in the middle

The fence-sitters neither support nor oppose the change. They are often playing a waiting game, looking out for who is going to win the game. Once they have made this decision, they will act. Some fence-sitters are simply undecided; some people decide quickly, whilst others need more reflection or persuasion. Either way, one of the most important things about fence-sitters is their number, which can be very significant. Work hard to convert them and you may be able to enlist their support.

After you have identified the current stakeholders and their postures, you need to figure out how to move them – from left to right on the chart. However, such movements entail costs, at least in terms of your time and effort. Thus, you need to determine what movements you can create, the trade-offs, and the best alternatives. This is where the Interest – Influence Grid comes into play.

This is a useful map to help understand the need for communication and potential resistance to change. Interest indicates stakeholders’ likely concerns, whilst Influence indicates their ability resist your recommendation or change.

These are candidates like Mike in the above grid. These are relatively unimportant people, but keeping in touch with them is a good idea, just in case their status changes.

These are candidates like Sally in the above grid. These people can be difficult. It is easy to ignore them as they apparently cannot derail the change. However, if sufficiently upset, they may gain influence to resist to change. Do remember that minorities can be very powerful, especially if they manage to band together or enlist powerful allies.

These are candidates like Amy in the above grid. Usually, people with a low interest are disinterested parties. However, if they are persuaded to oppose, they may evolve into formidable opponents and deter change. Thus, it is important to keep them on the loop and well-informed, for example, through regular meetings.

These are candidates like John in the above grid. These people are both, significantly impacted by change and most able act on it. They may either, support or oppose change. It is particularly important to engage these people in the change. Make sure that they understand what is going on. Get their buy-in and give them a sense of ownership in the outcomes.