Flywheel Effect – How to build an exceptional business?

If you have ever tried to drive a spin bike or a potter’s wheel, you know how difficult it is to start the wheel moving. However, once you’re moving, you’ll benefit from the momentum you’ve built up from your earlier efforts. Similarly, the framework can assist enterprises &  businesses to help grow by accumulating tiny wins that build on each other over time, eventually gaining enough momentum for development to occur on its own.

The term “flywheel” comes from mechanics, where it refers to a very heavy wheel that is used to generate and transfer energy to other parts of a machine, the “flywheel” requires significant force to start spinning, but once spinning at high speed and building momentum will begin storing and continue to turn by itself. Flywheels come in different shapes and sizes, and since rotating objects generate kinetic energy based on the distribution of their mass (moment of inertia) and how fast they rotate (angular velocity), those with larger diameters and heavier wheels will store more energy than smaller and lighter wheels, while those that spin faster store much more energy than ones that spin slower.

Picture a huge, heavy flywheel — a massive metal disk mounted horizontally on an axle, about 30 feet in diameter, 2 feet thick, and weighing about 5,000 pounds. Now imagine your task is to get the flywheel rotating on the axle as fast and long as possible.

It was used to state that companies don’t become exceptional as a result of a single intervention or initiative, but rather as a result of a series of small wins that accumulate over years of hard work until momentum takes over to power sustained periods of accelerated growth that greatly outstrip the effort being applied at that particular time.

The flywheel effect hypothesis states that there is always a mix of variables within a firm that, if properly aligned over time, can develop tremendous momentum and, as a result, produce a self-reinforcing virtuous cycle for the organization.

The flywheel effect occurs in business, just as it does in machines, because of very deliberate building and linking together of capabilities to execute against articulated strategic objectives in such a way that a compounding return on effort is introduced, resulting in continued acceleration in business growth.

An object at rest tends to stay at rest, and object in motion tends to continue in motion. Newton’s first law, applied to business. Flywheels (being massive heavy objects) are hard to get moving. If they get moving, they are likely to continue.

The faster the wheel is spinning, the easier it is to add incremental speed. The faster it moves, the more energy it generates. And the more excited everyone is about how great this Flywheel is!

A “runaway feedback loop” describes a situation in which the output of a reaction becomes its own catalyst.

No “one push” makes it happen. Continuous small inputs add up into an impressive output, eventually. The compounding return on effort is massive, and accelerates as it grows. These combined factors are maybe best exemplified in Facebook, and explain more about how insanely fast it became globally-dominant.

Sustained effort must be focused in one direction in order to maintain momentum and compounding returns. Misplaced effort is either wasted or counterproductive. Good To Great explains each of these concepts as:

The momentum of the thing kicks in your favor, hurling the flywheel forward, turn after turn … whoosh! … its own heavy weight working for you. You’re pushing no harder than during the first rotation, but the flywheel goes faster and faster. Each turn of the flywheel builds upon work done earlier, compounding your investment of effort. A thousand times faster, then ten thousand, then a hundred thousand. The huge heavy disk flies forward, with almost unstoppable momentum.

A majority of businesses fail to accomplish the flywheel effect because they do not commit to a clear set of objectives for the requisite period to attain the intended outcomes. Furthermore, they also do not follow the hedgehog principle. As a result, they are pulling in multiple directions at the same time because they lack a north star – a clearly articulated “Theory of Their Business,” and are thus readily swayed toward new goals.

The “flywheel” loses momentum and slows down each time the objective changes and resources are reassigned, eventually slipping into a Doom Loop, a circumstance in which every action leads to a worsening of the initial situation. The “flywheel effect” and the “doom loop” can occur in the same firm at the same time, especially if a company does not fully comprehend what components enabled the “flywheel” in the first wheel and makes rash alterations. 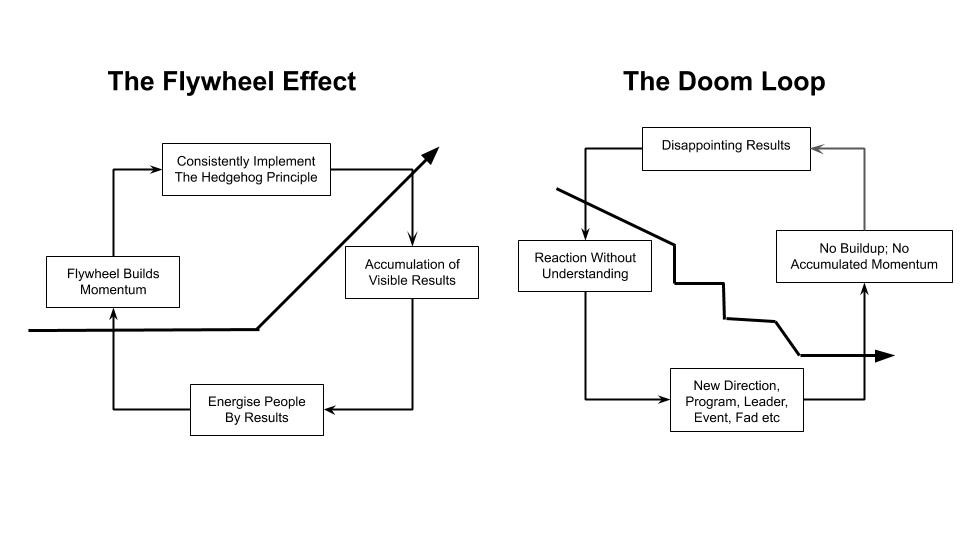 The Chicago Bulls, a basketball team in the National Basketball Association league in the United States of America, is an example of an organization that experienced both the “Flywheel Effect” and the “Doom Loop.” While most people think of Michael Jordan’s breakout season in 1991 as the “event” that led to the team winning six championships in eight years (1991 to 1998), it was actually the many decisions made by General Manager Jerry Krause between 1985 and 1991 that accumulated to build a team around Michael Jordan and resulted in the “overnight” success of 1991.

On the other hand, the decision not to renew the team’s coach’s contract (Phil Jackson) in 1998, as well as the clearing out (via retirement and trades) of at least four first-team players, slowed the team’s “flywheel” and introduced a “doom loop” that made every action taken to rebuild the team from that point result in incrementally worsening the team’s quality.

The most celebrated example of the application of the Flywheel effect is ‘Amazon’ which calls it the virtuous cycle. The company’s founder,  Jeff Bezos, wrote it on a napkin a few years after the company was founded & it is still the core approach that Amazon takes to improve customer experience & fuel growth.

Also, if the company is growing, you get this side benefit of a lower cost structure. It gets to leverage its fulfillment infrastructure, its logistics infrastructure, the website & which helps lower the cost per unit of all the things. The money saved either can be retained or be given as dividends or be used to further lower prices for the customers. It’s the last one that the company does which again leads better to customer satisfaction. If you feed any part of the loop, the entire cycle gets accelerated thereby helping the company to grow faster.

As a result of the positive customer experience, you receive a lot of traffic. Rather than simply selling Amazon products to monetize that traffic, the business concentrated on allowing third-parties to sell their products on Amazon; this is the cornerstone of third-party storefronts. Rather than focusing on things that Amazon already has, the company allows third parties to bring a selection that is difficult for Amazon to have, at least at first. This variety adds to the value of the customer experience. As a result, the cycle is able to reinforce itself.

On the other hand, Amazon is recognized for its cash machine strategy, which allows the corporation to run efficiently with extremely low-profit margins. Rather than paying dividends to shareholders, Amazon transfers the money to customers in the form of lower prices, while still making enough money to keep its short-term operations running.

To summarize the strategy, we can say that

Back in 2014, David Sacks explained Uber’s geographic density as the key driver to network effect and virtuous cycle. 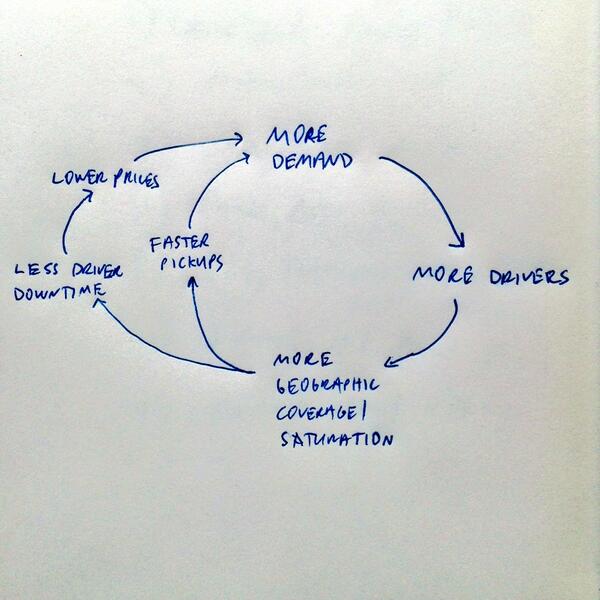 As Uber expands in a market, and as demand and supply both grow, pickup times fall. Residents of San Francisco have seen this play out over many years. Shorter pickup times mean more reliability and more potential use cases. The more people that use Uber, the shorter the pick up times in each region.

As Uber grows in a city, the outer geographic range of supplier liquidity increases and increases. Once again, Uber started in San Francisco proper. Today there is coverage from South San Jose all the way up to Napa. The more people that use Uber, the greater the coverage.

As Uber grows in any given city, utilization increases. Basically, the time that a driver has a paying ride per hour is constantly rising. This is simply a math problem – more demand and more supply make the economical traveling-salesman type problem easier to solve. Uber then uses the increased utilization to lower rates – which results in lower prices which once again leads to more use cases. The more people that use Uber, the lower the overall price will be for the consumer.

The lens of Uber as hundreds of 2-sided local marketplaces also helps explains the importance of compromises like surge pricing and fare cuts. These mechanisms keep the marketplace in balance, and help grow the network effects that Gurley and Sacks recognize in Uber. Without them, one side of the marketplace might outstrip the other, causing a downward spiral. So even though neither side is happy with all of the marketplace balance tools that Uber puts to use, it’s ultimately a foundational tool in Uber’s business.

Take surge pricing, for instance. It’s easy to hate it, as a rider, and there are legitimate cases where it should be turned off. But think about it from the driver’s point of view- it gives them a huge incentive to get out onto the road, and to come to the exact area in the city where they are most needed. In fact, surge is done on a hyper-local basis- just check out the screenshot of the driver/partner app to get a sense for how tightly drivers are directed to come to high-demand spots.

Getting the Flywheel to spin 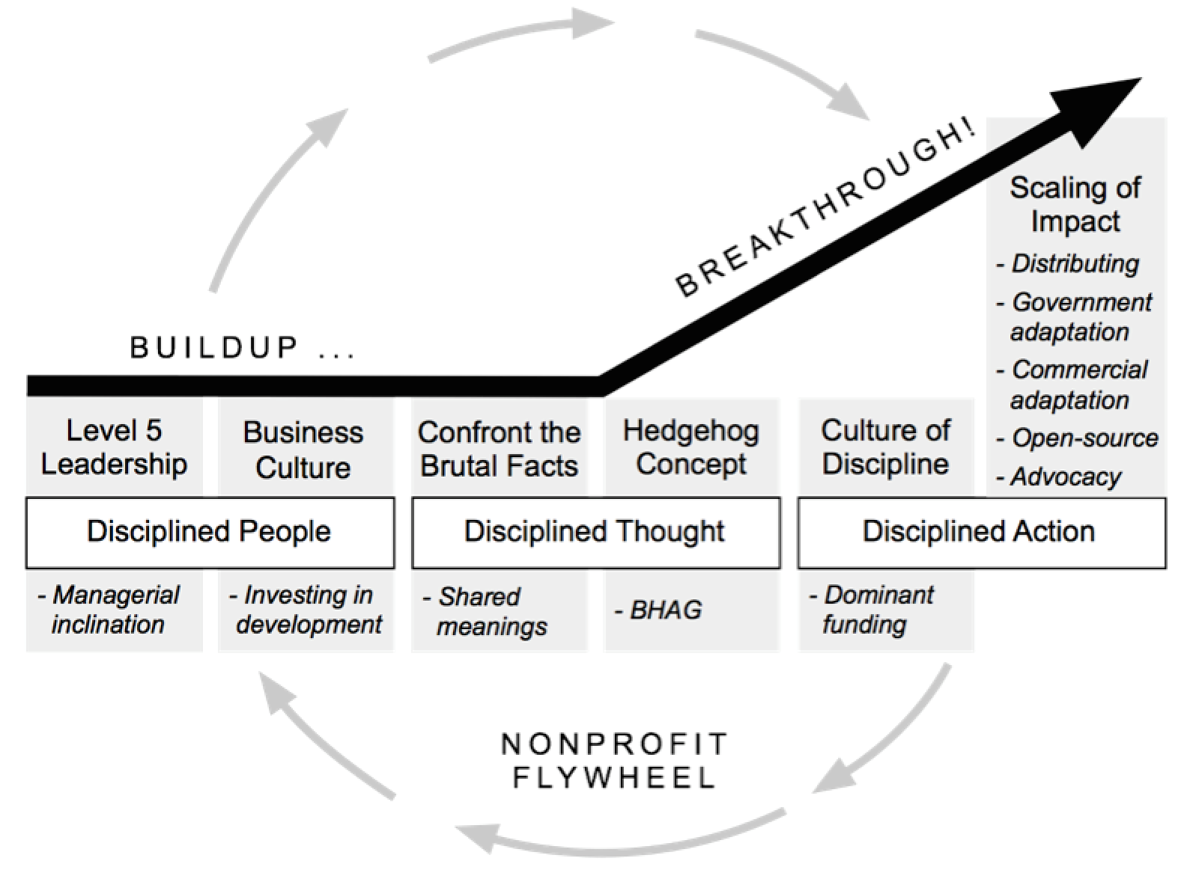 According to Jim Collins there are three areas to focus on consistently to get the Flywheel to start to spin:

Jim Collins also has a website where a toolkit can be downloaded called the “Good to Great Diagnostic Toolkit”. This toolkit has worksheets that will help you to identify your strengths and weaknesses and hopefully identify what needs to be done to get the Flywheel turning.

About the Author(s): Mithun Sridharan, Kapil Arora and Souvik Roy

I am Kapil Arora, an MBA student at the Indian Institute of Foreign Trade (IIFT), New Delhi. I have previously worked as Reliability Manager in Reliance Industries Limited at the Jamnagar Complex, the world's largest refining hub. I have also previously co-authored 2 research papers during my graduation from the College of Engineering Pune (CoEP). I am a socially inclined person with an inquisitive mind. Please feel free to connect with me on LinkedIn

I am Souvik Roy, an MBA (IB) student at the Indian Institute of Foreign Trade (IIFT), New Delhi. I have previously worked as a Business Analyst with Genpact India in their business consulting division and as a Business Analyst for Lenovo India in one of their E-Commerce teams. I am a graduate in Metallurgical and Materials Engineering from Jadavpur University, Kolkata where I was the placement coordinator of my batch. Please feel free to connect with me on LinkedIn