Business success is a complex framework comprising of many interconnected parts. Collins recommends companies to focus on one thing at a time to achieve greatness. This single virtue enables companies to beat their competitors and grow to become successful business. According to Collins, it takes an average of about four years to fine-tune the Hedgehog Concept within an organisation.

The Hedgehog Concept is based on an ancient Greek parable about the hedgehog and the fox. The fox can do many things at once:

The scenario always ends with the hedgehog thwarting the fox, which retreats with its nose full of the hedgehog’s spines. The hedgehog can only do one thing and does it perfectly – it defends itself by curling up into a ball and raise its spines.

Metaphorically, large companies that achieved greatness can be compared to hedgehogs. Hedgehogs are slow and less smart compared to foxes. But, they simplify the world around them and focus on a single, coherent vision. Companies that focus on multiple things at once are the foxes. They can lose focus, which undermines their chance of success and achieving greatness. 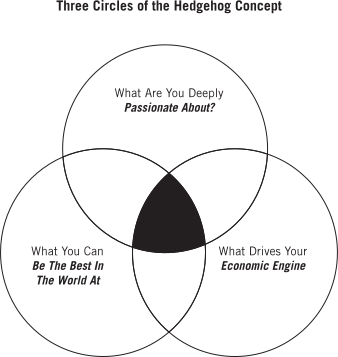 What are you deeply passionate about?

This is about understanding and finding out everyone’s passion within the organisation. What:

What can you be the best in the world at?

In other words, the emphasis and focus should be on the organisation’s strengths. It’s not just about core competencies, but also about other competencies that haven’t been achieved yet. It’s not a bad thing to have weaknesses. An organisation can have lower scores in certain areas.

What drives your economic engine?

An organisation has to be aware what its economic engine is. In other words, what products, services, resources, or capabilities generate revenues and profits. Simply put, the organisation should understand what they earn money with. This insight will reveal the drivers that deliver the lasting effect on the organisation’s long-term success.

After researching the questions from the three circles, the organisation should determine where they overlap. Hedgehog Concept is found at the overlap – the central vision that supports the organisation’s strategy. By answering the questions from the circles, the organisation becomes more self-aware. Subsequently, they can translate self-awareness into a simple concept to guide important decisions. Hence, the Hedgehog Concept isn’t a goal or strategy. But rather, it’s more about insights and guiding principles for strategic choices.