Crossing the Chasm is a concept for visualizing the adoption of a new technology over time.

In 1962, the sociologist Everett Rogers published the book Diffusion of Innovations. In this book, he classified consumers in distinguished groups based on their purchasing behavior. He based this classification using research from over 500 diffusion studies. Today, the model is well known as the Technology Adoption Life Cycle. This model comprehensively describes the adoption or acceptance of a new technological product or innovation. In Crossing the Chasm, Geoffrey Moore elaborates the marketing techniques to successfully target mainstream consumers based on customer groups in the diffusion lifecycle.

Based on demographic and psychological characteristics, customers fall into one of the 5 adopter groups, namely: 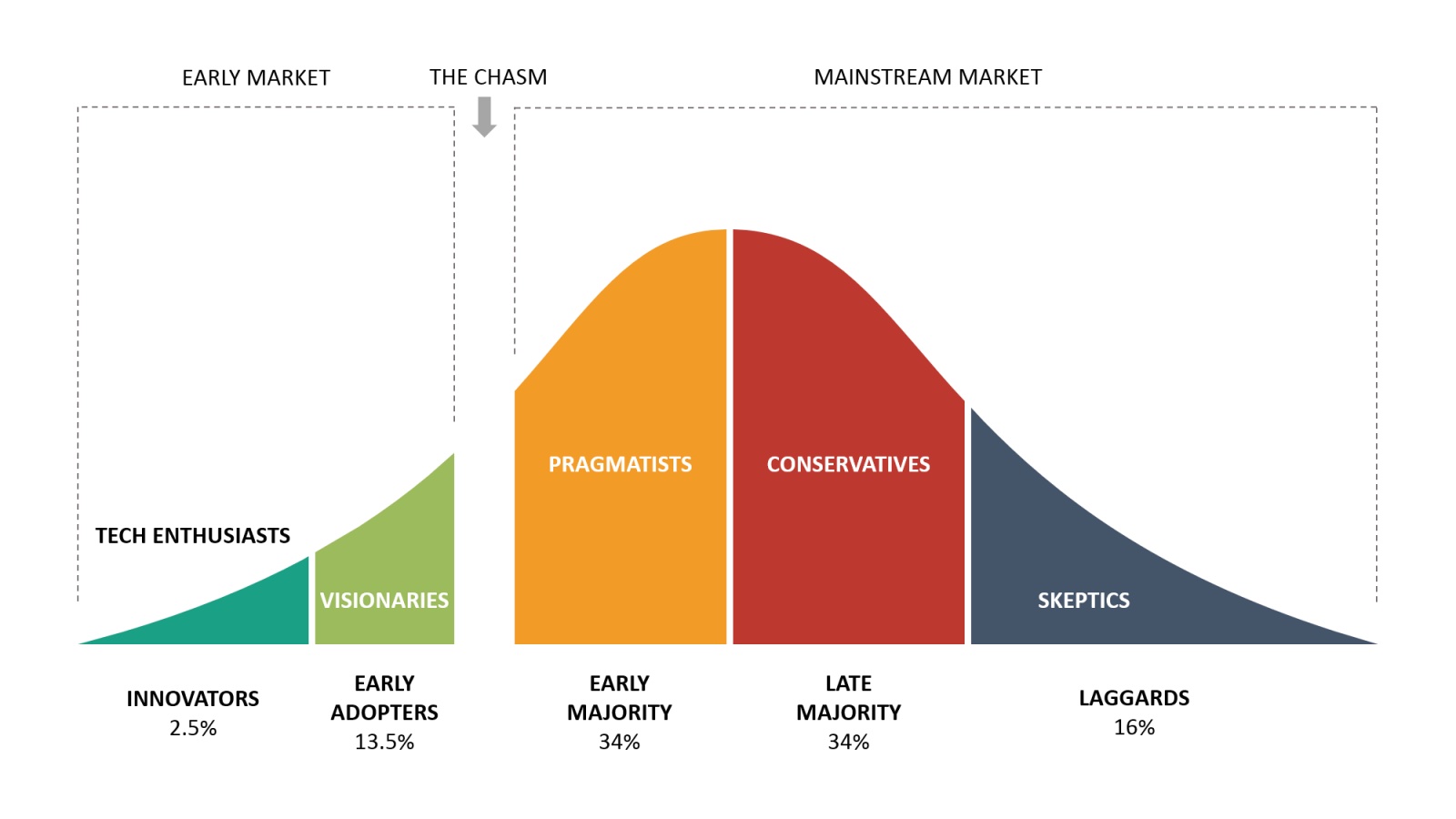 As can be observed, the technology adoption lifecycle has a bell curve. The divisions are approximately equivalent to where standard deviations would fall. This means:

Each group represents a unique psychographic profile i.e. a combination of psychological and demographic traits. Hence, marketing to these groups require completely different strategies from those of other groups. Marketers, by better understanding the differences among the groups, can better target all of these consumers with the right marketing techniques.

Innovators are technology enthusiasts. This is the first group of consumers that are likely to invest in your product. Innovators aggressively pursue new products and technologies. Sometimes, they seek out innovations even before the company has launched a formal marketing program. This is because technology occupies a central interest in their life or business. For this customer group, completeness of product feature set or performance are secondary.

Unfortunately, there aren’t a lot of innovators (roughly 2.5%) in any given market segment. Usually, they are unwilling to pay a lot for new products. Nonetheless, winning them over is important because their endorsement offers the required reassurance for other consumers in the marketplace. Furthermore, technology enthusiasts serve well as a test group to make the necessary modifications before targeting the mainstream.

Like Innovators, early adopters are visionaries that buy into a new product concept very early in its life cycle. However, unlike Innovators, they are not technologists. Rather, they are visionaries that are not just looking for an improvement, but also a revolutionary breakthrough. Consequently, they are willing to take high risks trying something new. They are the least price-sensitive of the customer groups and are highly demanding in product feature set and performance.

Early Adopters do not rely on well-established references in making buying decisions. Instead, they prefer to rely on their own intuition and vision. In addition, they are willing to serve as highly visible references to other adopter groups in the population. Since visionaries are good at alerting the rest of the population, they are of upmost importance to win over.

This customer group comprises of the Pragmatists. The first two adopter groups belong to the Early Market. However, in order to become truly successful, a company must win over the Mainstream Market, starting with the Early Majority. These Pragmatists share some of the Early Adopters’ ability to relate to technology. However, they are driven by a strong sense of practicality. They know that many inventions end up as passing fads. Consequently, they are content to wait and see how other customers are faring with the technology before investing in it themselves. They want to see well-established references before investing substantially. Because there are so many people in this segment (roughly 34%), winning these people over is fundamental for any business that strives for substantial profits and growth.

This group comprises primarily of the Conservatives. The Late Majority as a group is about as big as the Early Majority (34% of the total population). They share all the concerns of the Early Majority. In addition, they believe far more in tradition than in progress. Customers in the Early Majority group are comfortable with their ability to handle a new technological product if they decide to purchase it. In contrast, members of the Late Majority are not. As a result, these Conservatives prefer to wait until something has become an established standard and invest only at the end of a technology life cycle. Even then, they want see lots of support and tend to buy from large, well-established companies only. Being the market leader is therefore an important prerequisite in order to win over the Late Majority.

This group is comprised of the Skeptics. This segment constitutes 16% of the population. These people simply don’t want anything to do with new technology. The only time they ever buy a technological product is when its buried deep inside another product. These Skeptics have a strong believe that disruptive innovations rarely fulfill their promises. They are almost always worried about unintended consequences. From a market development perspective, Laggards are usually regarded as not worth pursuing. However, their criticism on the product feature set and performance provide valuable feedback for technology companies.

You can see a gap between Early Adopter and Early Majority groups in the Technology Adoption Life Cycle. This gap represents the chasm that the technology has to cross. It signifies the credibility gap that arises from using the group on the left as a reference base for the customer base on the right. The chasm exists because consumers trust references from people that belong to their own adopter group.

Of course, this creates a challenging dilemma for technology companies.

How could you use people from the preferred reference group if they haven’t bought from you yet?

In other words, using customers from one group as references for the other groups is highly ineffective. Hence, the Chasm!

Since the leap from the Early Adopters to the Early Majority means the transition from the Early Marktet to the Mainstream Market, crossing the chasm is of upmost importance to truly achieve market success with a newly launched product / technology.