Andon Cord – How Amazon and Netflix use Toyota principles?

Andon Cord is a product of Jidoka – a concept that empowers operators to detect abnormal conditions and immediately stop work.

Andon (行灯) is a Japanese word that means paper lantern that the Japanese used for lighting since the Edo period. Toyota introduced the Andon Cord concept in its factories following the Toyota Production System. Today, many manufacturers use this invention in their assembly environments. The Andon cord consists of a pull cord or button that workers could activate to stop the production and warn management in case of a significant issue.

This way, the production line would not manufacture any faulty units while working on fixing the problem as fast as possible. Front-line workers can resolve quality or other issues by stopping production. Amazon implemented the Andon Cord principle for customer service.

Taiichi Ohno, the father of Toyota Production Systems (TPS), architected a leadership and technology model incorporating some of the original Jidoka ideas along with a lot of other interesting innovations. His ideas produced an unprecedented run of quality and manufacturing success for over 40 years. One of those tools was called the Andon Cord, also known as the Andon Board.

The Andon Cord was a rope. Just a rope. But, this rope was game-changing. When pulled, the rope would instantly stop all work on the assembly line. Anyone had the right to pull the cord at any time.

In the book, Toyota Kata – Mike Rother  points out that it wasn’t the tools that made Toyota great. But rather, the culture and specific behavior behind those tools.

Toyota implemented the Andon Cord as a physical rope that followed the assembly line. Any front line worker could pull the rope to stop the manufacturing line at any time. At Toyota, it was a tool to instill autonomic behavior patterns – what Rother calls Kata.

The Andon Cord is a product of Jidoka – a concept that empowers operators to detect abnormal conditions and immediately stop work. Jidoka, created by Toyota in the early 1900s, is one of the founding pillars of the Toyota Production System, and the Andon Cord is one of the most well-known examples of the concept at work.

In Toyota’s view, employees not only had a right, but also an obligation to pull the cord if they discovered a problem with production.

Once the worker halts production, a team leader would immediately go-see the issue by visiting the workstation. Toyota lives by this go-see culture. Subsequently, the team leader and the team investigates the root cause of the issue to solve the problem and restart production.

Toyota realized that unaddressed problems on the assembly line create huge complications if left unattended. The Andon Cord was an abrupt and effective way to deal with manufacturing issues at the source, before they festered into something much worse.

Toyota later replaced the cord with an electronic signaling device. However, this principle became the subject of management stories worldwide.

The essence of the Andon Cord idea is to stop something wrong from escalating as quickly as possible. It prevents things that could have easily been managed at the nascent stages from growing to behemoths that require enormous strength and vast resources to handle.

As these principles demonstrate, setting up the right systems is critical to organizational success.

Put a good person in a bad system, and the system will win every time (W. Edwards Deming)

Since day one, Amazon is relentlessly customer-obsessed. From the start, Jeff Bezos knew that customers wouldn’t pay for waste. So, waste avoidance (frugality) is a fundamental concept and focus area at Amazon.

Amazon adopted the principle of the Andon Cord from Toyota for the products it ships. The process begins when an Amazon customer service representative receives a call from a customer with a problem involving the product He / she received from Amazon. If it is a recurring issue, the customer service representative can can pull the cord when they suspect a problem with their inventory or pause production.

Subsequently, Amazon removes the product from the website until it fixes the issues. This stops all sales and shipments before the issue spreads to more customers. Amazon says this practice has allowed it  to reduce returns and support requests. Amazon Andon Cords are pretty rare at c.a. 0.03% at any given time. Amazon has installed automatic mechanisms to restart production / 3rd party shipments, as soon as it resolves the defects. Sophisticated processes at Amazon enable identification, tracking and correction of such errors. 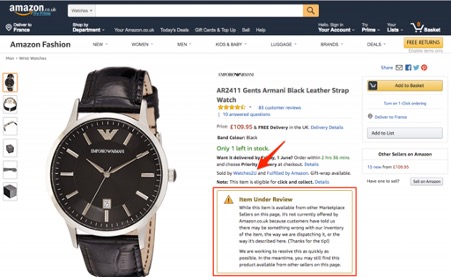 On this example, a customer can no longer purchase the product from Amazon. However, seller is listed on Amazon. Some potential issues that can trigger an Amazon Andon Cord are:

When Amazon receives this information, it halts all sales of this product until the seller takes remedial action.

Another example of an Andon Cord is at Netflix. Netflix has an interesting way of exercising their Andon Cord, although they don’t actually call it an Andon Cord. Along the same line as Toyota, at Netflix failures are good things. Netflix has built in their own automated form of Jidoka.

At Netflix, they actually inject this kind of Jidoko into their systems on purpose by intentionally trying to break systems in production. They have developed what is now famously called Chaos Monkey.

Poka-Yoke is another term that comes from Shigeo Shingo at TPS. Poka-Yoke means mistake-proofing.Chaos Money is a process that randomly kills live running production servers. This behavior is known by everyone who works at Netflix. It’s part of their culture. There are no surprises about this practice. Developers plan and Poka-Yoke their code and systems accordingly.

Netflix’s Kata is so obsessed with failure they create their own failures on purpose. As you can imagine, Netflix is a learning organization and every one of these failures is treated as a science experiment. Either one of two things happens when a server is killed by their Chaos monkey:

The best case You don’t get to Chaos Monkey overnight.is when the injected failure causes no customer disruption. Netflix strives to move its Improvement Kata in that direction. Like any good operating Kata based organization, Netflix has been practicing their Kata for quite a few years now. Much of their Kata is based on several continual improvements and organizational learning.

Netflix Think about a fuse in your home. If you inadvertently load up to much power in one area of your house (due to a short-circuit), you end up sending more power to that area, while losing power in other sections of your home.uses an interesting method that resembles Poka-Yoke through a Circuit Breaker Pattern. These are software delivery patterns where the software code is designed very much like a circuit breaker in your home. If one service dies, it isolates or is bounded to only fail the things it controls and not create cascading service outages. In other words, this design pattern restricts the blast radius of a software issue.

The Andon Cord was a way of increasing the compounding for Toyota. Another key point in this process was that even if the team leader knew a better answer, Toyota felt that a solution from the team member was a better outcome. If the problem is not understood at the line level, that is the team member / mentee, then the problem was not solved. Again, decisions were pushed down the chain of command.

The practice of allowing people to pull the Andon Cord has powerful implications:

By putting the Andon Cord in the hands of all the workers, Toyota effectively maximized the use of that local knowledge. Everyone knew they had the ability to actually improve the process and so they did.