Are robots taking over our jobs?

In October 2016, an Uber trucking subsidiary named Otto delivered 2,000 cases of Budweiser 120 miles from Fort Collins, Colorado, to Colorado Springs—without a driver at the wheel. Within a few years, this technology will go from prototype to full production. The biggest cost savings for the trucking industry will eventually come from eliminating the driver entirely and that means millions of truck drivers will be out of a job! The idea that commercial trucking could be done by robots is a relatively new idea – and a potentially controversial one, given the possibility that robots could one day replace human drivers.

In a recent article, titled You Will Lose Your Job to a Robot—and Sooner Than You Think‘, the American political blogger and columnist, Kevin Drum, makes a compelling argument why the future of work looks bleak. His central idea lies in the exponential progression of Artificial Intelligence (AI). According to his article, AI will reach 1/10th the power of the human brain by 2035; by 2045, we will have full human-level AI.

In the future, the meaning of work will change, as history has demonstrated. In the context of AI, the following categorical changes are to be expected: 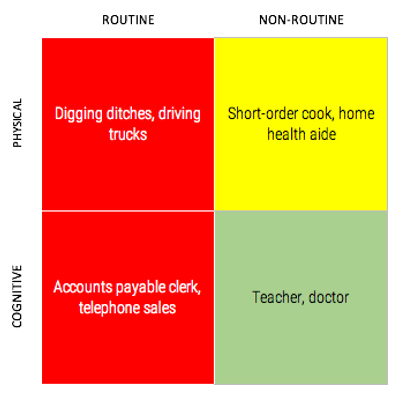 As per the article:

Routine tasks will be the first to go—and thanks to advances in robotics engineering, both physical and cognitive tasks will be affected. Nonroutine jobs will be next: surgeons, novelists, construction workers, police officers, and so forth. These jobs could all be fully automated during the 2040s. By 2060, AI-based robots will be capable of performing any task currently done by humans.

Personally, my views on the future of work digresses from those of these futurists and fear-mongers. AI becomes a very potent resource only if we have it under our control. If we can control its release, we win. To give you an analogy, the water in a dam could be deployed to a myriad of beneficial purposes. To do so, we need a framework, tools, and structures to harness this natural resource.

Similarly, we should be thinking of AI and robots in the framework as we control the dynamics of water. Much of the futuristic thinking seems stuck in the previous era when knowledge was hard to come by and we celebrated each new piece of the puzzle as it emerged. However, what we should be celebrating is our ability to build the dam and control the forces of nature.

A note for self-proclaimed futurists

Futurists need to learn how to think holistically. They seem to assume that those being left behind by the technological disruptions will just succumb and die to make way for the glorious new day that is coming. But, what they’re missing out on the element of human ingenuity, resilience, and adaptability. To me, knowledge is the engine that drives human development – and it has been throughout history. AI takes the knowledge to its pinnacle. Combined with machines and human ingenuity, this tipping point is poised to alter – what it means to be human. Therefore, futurists need to think about the entire picture, all the parts involved in the human endeavour, and not just the latest fads that are fun to speculate about.

So, instead of saying:

We should be asking:

What do we want AI to do? And when? How fast do we want to bring it online? How are we going to control the pace of it’s emergence? To what degree should it emerge at all?

I am Mithun Sridharan, the Founder & Author of Think Insights and INTRVU. I am a Global Industry Advisor at Amazon Web Services, where I advise CxOs & Senior Leadership at global Fortune 100 companies on their strategic business transformation initiatives. Prior to Amazon, I served on senior managerial and leadership roles at leading Management Consulting firms, such as KPMG AG and Sapient Consulting. The insights shared in this website are from my 1st-hand experiences in advising diverse clients across the Capital Markets, Automotive and Hi-tech industries. Please feel free connect with me on LinkedIn.

The opinions and views expressed in this blog are my own and don't reflect or use Intellectual Property (IP) from my startups, other ventures, associates (both, business and personal), or clients, employers, etc.