Kanban is a lean method designed to help you visualize your work, maximize efficiency, improve agility & improve collaboration among teams.

Kanban is enormously prominent among teams globally. But, the Kanban methodology dates back more than 50 years. In the late 1940s, by Taiichi Ohno, an Industrial Engineer & Businessman, began developed this methodology to improve productivity & efficiency of Toyota compared to its American automotive rivals. With Kanban, Toyota achieved a lean, flexible & efficient just-in-time production control system that increased productivity while reducing cost-intensive inventory of raw materials, semi-finished materials, and finished products. 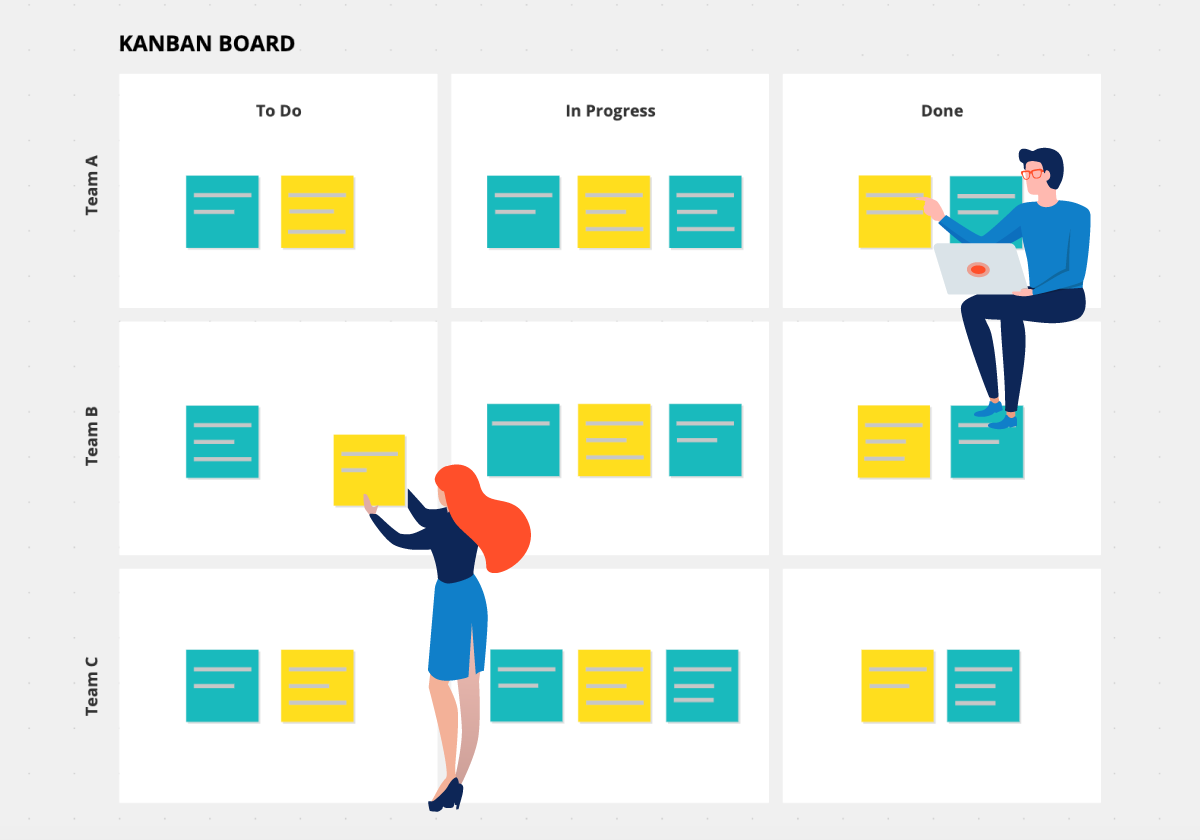 The Kanban methodology was based on the model that supermarkets were using to stock their shelves. Supermarkets stock just enough product to meet consumer demand. This practice optimizes the flow between the supermarket & the consumer. As a result, the inventory levels better matched with customers’ consumption patterns. This resulted in significant gains in efficiency & inventory management by decreasing the amount of excess stock supermarkets must hold at any given time. Simultaneously, supermarkets can still ensure that the given product a consumer needs is always in stock & avoid stock outs.

When Toyota applied this same system to its factory floors, it bettered align its massive inventory levels with the actual material consumption patterns. To communicate capacity levels in real-time on the factory floor & to suppliers, workers would pass a card, or Kanban, between teams. When a bin of materials being used on the production line was emptied, the workers passed a Kanban to the warehouse describing what material was needed, the exact amount of this material, & so on.

The warehouse would have a new bin of this material waiting, which they would then send to the factory floor, & in turn send their own Kanban to the supplier. The supplier would also have a bin of this particular material waiting, which it would ship to the warehouse. While the signaling technology of this process has evolved since the 1940s, this same Just In Time (JIT) manufacturing process is still at the heart of it.

The core principles of Kanban are applicable to almost any industry. Agile software development teams have adopted this methodology & experienced significant success. While kanban was introduced by Taiichi Ohno in the manufacturing industry, it is David J. Anderson who was the first to apply the concept to IT, Software development and knowledge work in general in the year 2004.

David built on the works by Taiichi Ohno, Eliyahu Goldratt, Edward Demming, Peter Drucker and others to define the Kanban Method, with concepts such as pull systems, queuing theory and flow. His first book on Kanban – Kanban: Successfully Evolutionary Change for your Technology Business[1] – published in 2010, is the most comprehensive definition of the Kanban Method for knowledge work.

How Does Kanban Work?

In Japanese, Kanban literally translates to visual signal. Kanban teams display each work item as a separate card on the Kanban board. A Kanban board is either a physical board on a wall or a digital equivalent. You can use sticky notes on a physical board or magnets on a metallic board as an analog equivalent. The board has a number of columns, with each column representing a stage in the overall workflow or process. In the simplest Kanban board, these stages could be “To do,” “Doing” & “Done.” The sequence is usually displayed from left to right.

Visualization is important because it allows trends and patterns to be more easily seen. Representing work items as cards allows the team to visually track the progress of work items through the entire workflow. The cards feature critical information about that particular work item, such as the person responsible for that work item, a brief description of the work item, how long that item is estimated to take, & so on. The cards may also feature screenshots & other relevant technical information that is valuable to the assignee.

As a result, the team members can see the state of each work item at any given point in time, as well as all of the associated details. This ensures increased focus, full traceability, & fast identification of blockers & dependencies. Different color cards will distinguish different types of tasks. You can add extra colours to the cards to highlight important details. These could be late deliveries, progress blockages, waits on sub-task completion, etc.

Any type of information is valid on a Kanban board. But the contents shouldn’t be too complex, so they can be easily scanned & quickly understood. Kanban boards should be updated at least daily, ideally with the entire team present to discuss progress, move cards, identify any blocked tasks, agree who is responsible for unblocking them & decide who will work on tasks that are ready to be started. It’s most important to ensure every task is on the board, so the actual workload & the status of all starts are visible, which will help change behaviors. When the entire team realizes everyone has assumed too many tasks, then refusing even more tasks doesn’t seem so scary.

Contrary to popular belief, people are more productive if they work on & finish just one task at a time, before starting another. Actually, there is a limit to how attentive anyone can be to the task at hand. The human brain can’t actually focus on two tasks simultaneously; it just switches between them. Instead of focusing completely on one task & applying the energy it deserves, most of us thinly focus on several tasks, almost guaranteeing a mediocre job of all of them.

Kanban is a simple method to avoid overload, known as limiting work-in-progress (WIP). By applying WIP limits, your team has the opportunity of locating bottlenecks in their working processes before they become blockers. Actually, limiting work in progress is one of the practices that makes Kanban so efficient. Kanban WIP limits ensure that your team will keep an optimal pace of work without exceeding its work capacity.

Having too many WIP limits means your team is working on multiple tasks & switching context all the time. This will not help them meet the deadlines. On the other hand, having really few limits means that your team members are waiting & are static. For example, this could happen when a given item is pending on a 3rd party. In order to escape from this paradox, you have to carefully monitor your KPIs when you either increase or decrease your limits.

There are many ways to determine the WIP limit. The simplest approach is to match it with the number of team members. Each person will only work on one task at once. If the team regularly reaches the WIP limit, creating new Kanban board will not solve the issue. Reaching the limit indicates a lack of capacity. If you see that you are constantly pressurising the limit, it’s a sign of committing to too much work.

Lead time and cycle time are widely used terms in the world of Kanban. Lead time is the period between a new task’s appearance in your workflow & its final departure from the system. Cycle time begins when the new work item enters in progress stage & somebody is working on it. Professor John Little at MIT concluded after various researches that the more work we have in progress the greater the cycle time. The equation became famous as the Little’s law and the cycle time formula looks like this:

Kanban works best when the lead time is relatively short. Ideally, the lead time should be in hours or days, rather than weeks or months. In this case, you should break down larger portions of work to separate, smaller, self-contained tasks. This works particularly well for projects that are delivering new products, services, systems, processes, etc. It also works well for making continual improvements, with each task a small incremental improvement.